Trapper Nelson came to the area in the 1930s and lived off the land by trapping and selling furs. He was a loner for the most part, who found security in this area and a way of life that was suited to his skills and temperament. 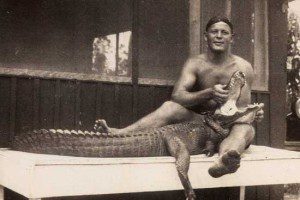 He quickly became famous as the “Wildman of the Loxahatchee”. Yet, with his limited education, he managed to make a living, built a much-visited wildlife zoo and acquired large land interests. After his death in 1968, the state acquired his land, preserving his home and grounds for future generations to enjoy.

In January of 2013 our family rented a bunch of kayaks and took a trip out of Jonathon Dickinson State Park to Trapper Nelson’s. The weather was warm at the start of our trip, but it soon turned a tad bit chilly. All in all we had a great time. You can never go wrong spending time with family 💖